Discover Downtown Toronto, the “City within a Park!”

Downtown Discovery Walk leads you through the dense core of the City. Hidden among the skyscrapers, you will discover a rich variety of parks, gardens and streetscapes.

Either you are visiting Toronto or just want to explore some city spots, and show your guests, East part of Toronto has lots to discover.

If you drive by car, you can find parking near Courthouse Square and start your journey from  elegant urban Courthouse Park. Alternatively it is very easyly acessible by TTC or walking distance from Union Station.

Distinctive feature is trellised rose archway with espaliered apple trees, which are  rare.  Axial views and corridors create a variety of intimate spaces.

Near park there is a York County Court House, which was designed and built in 1852 and witnessed many of historical events.. Today it is home to The Court House Market Grill and Restaurant 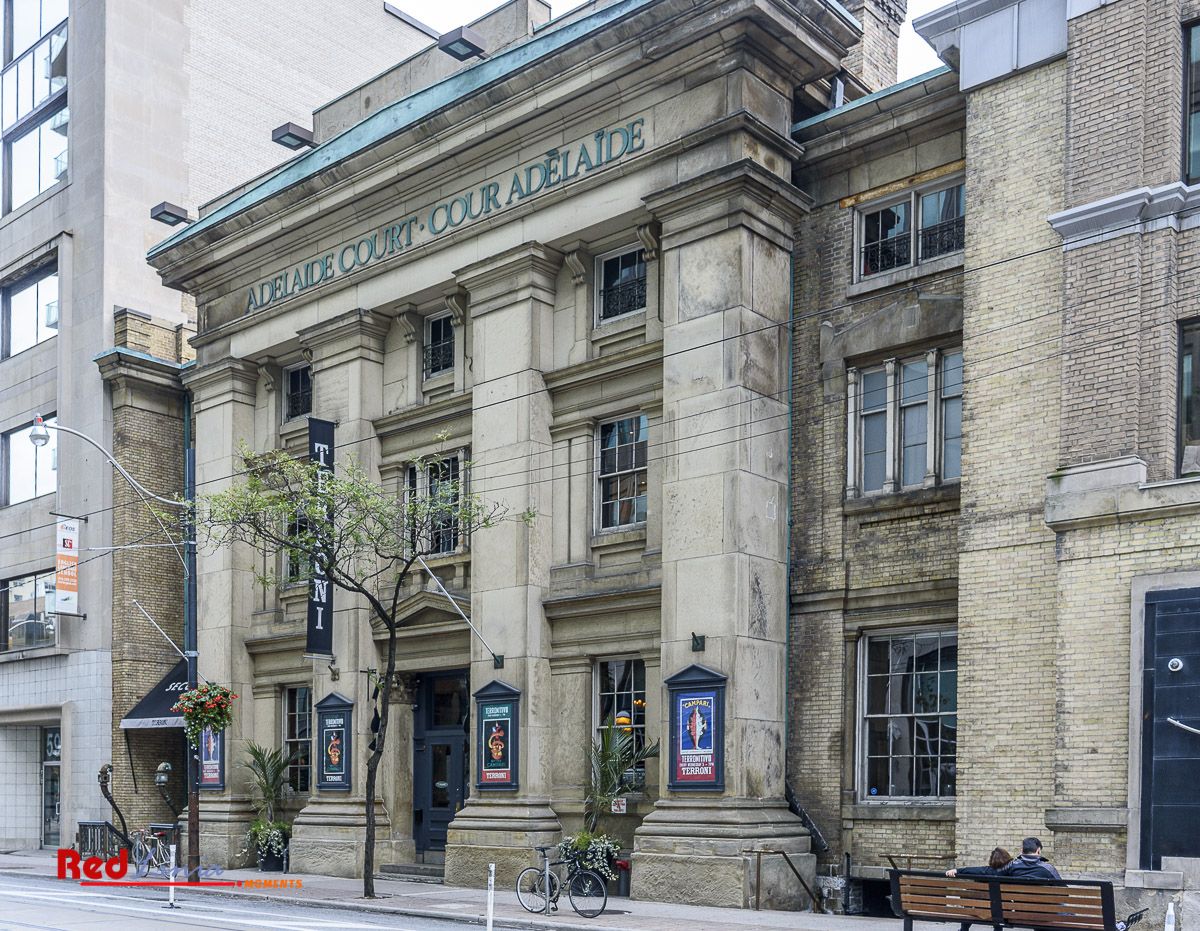 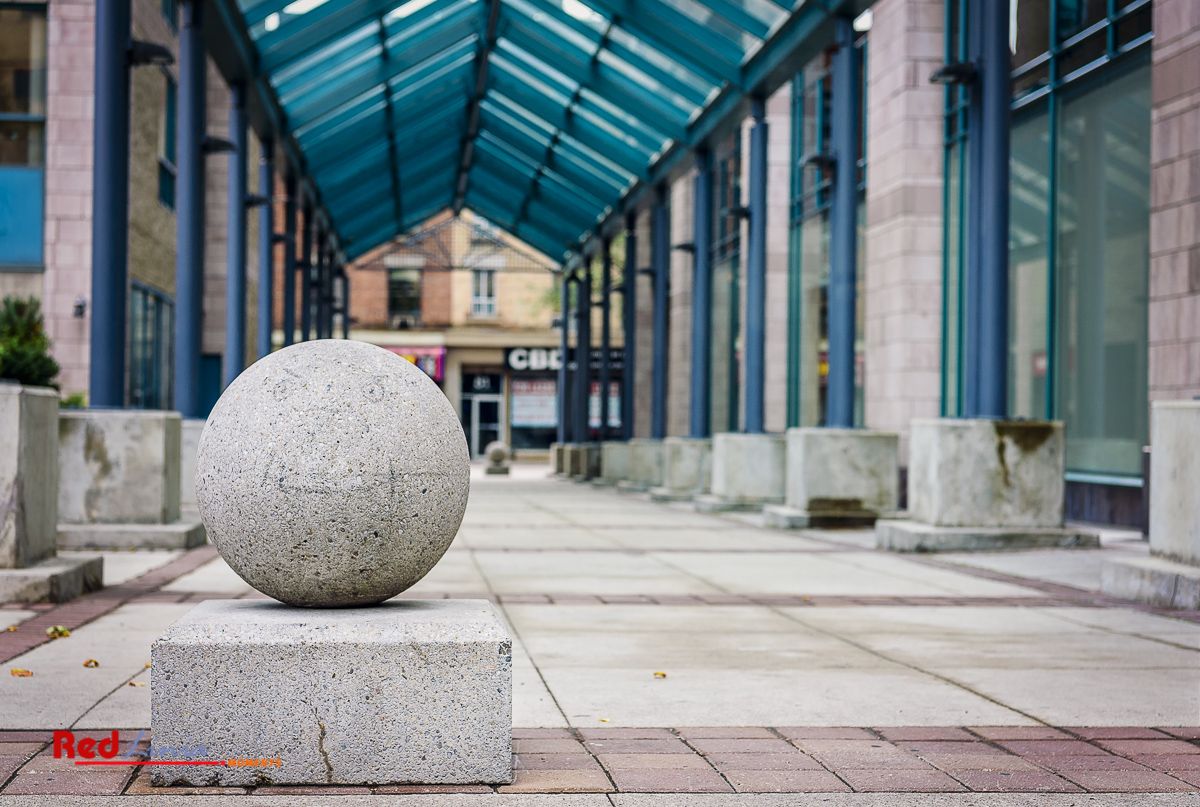 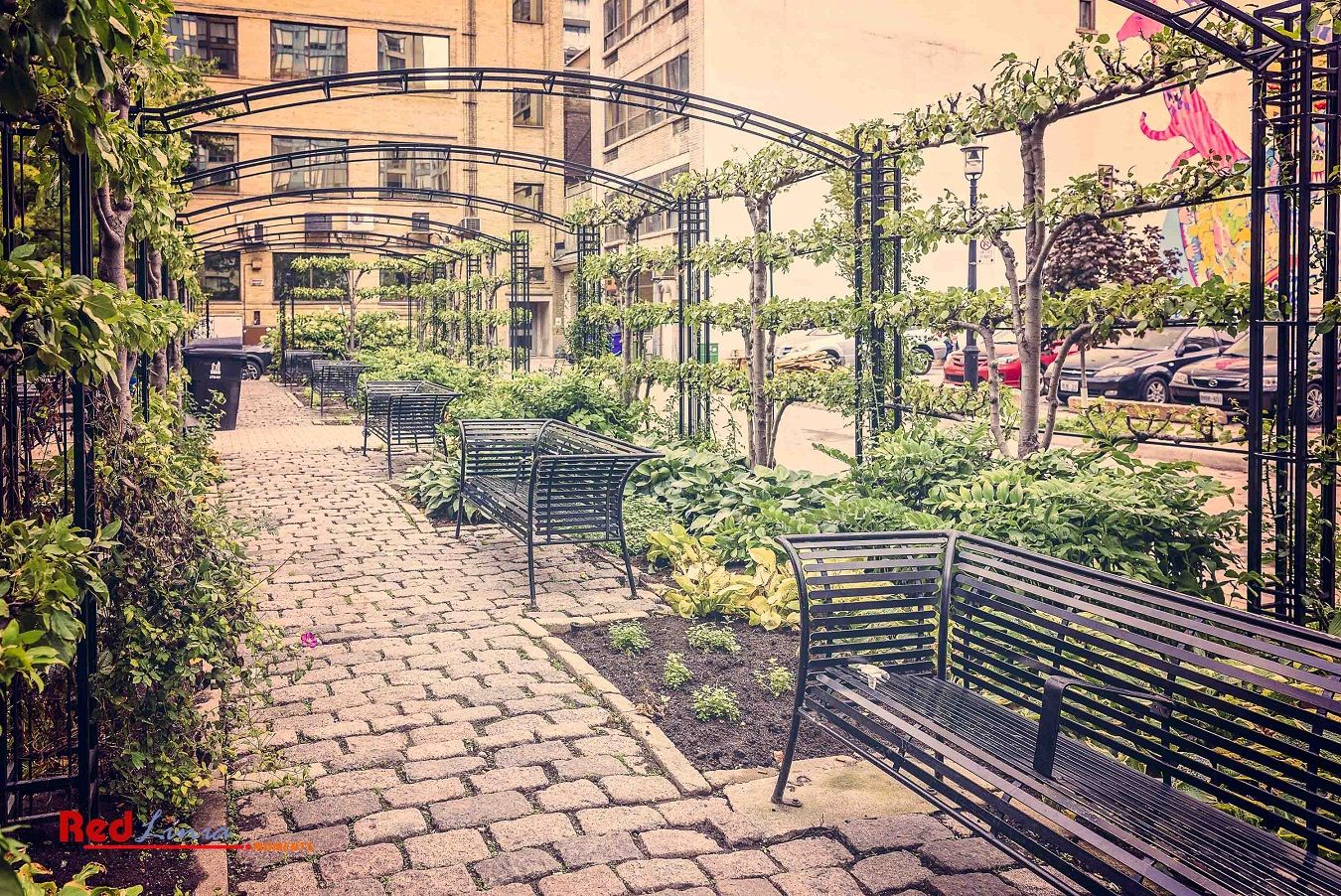 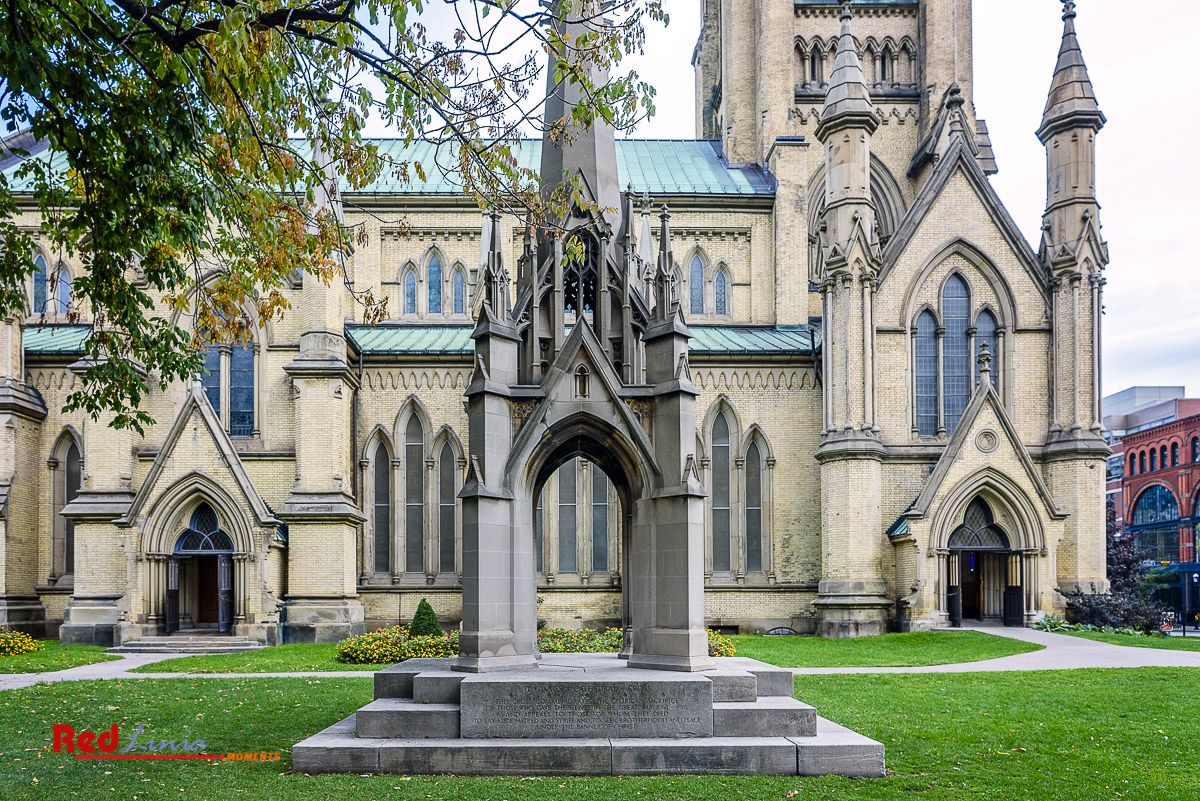 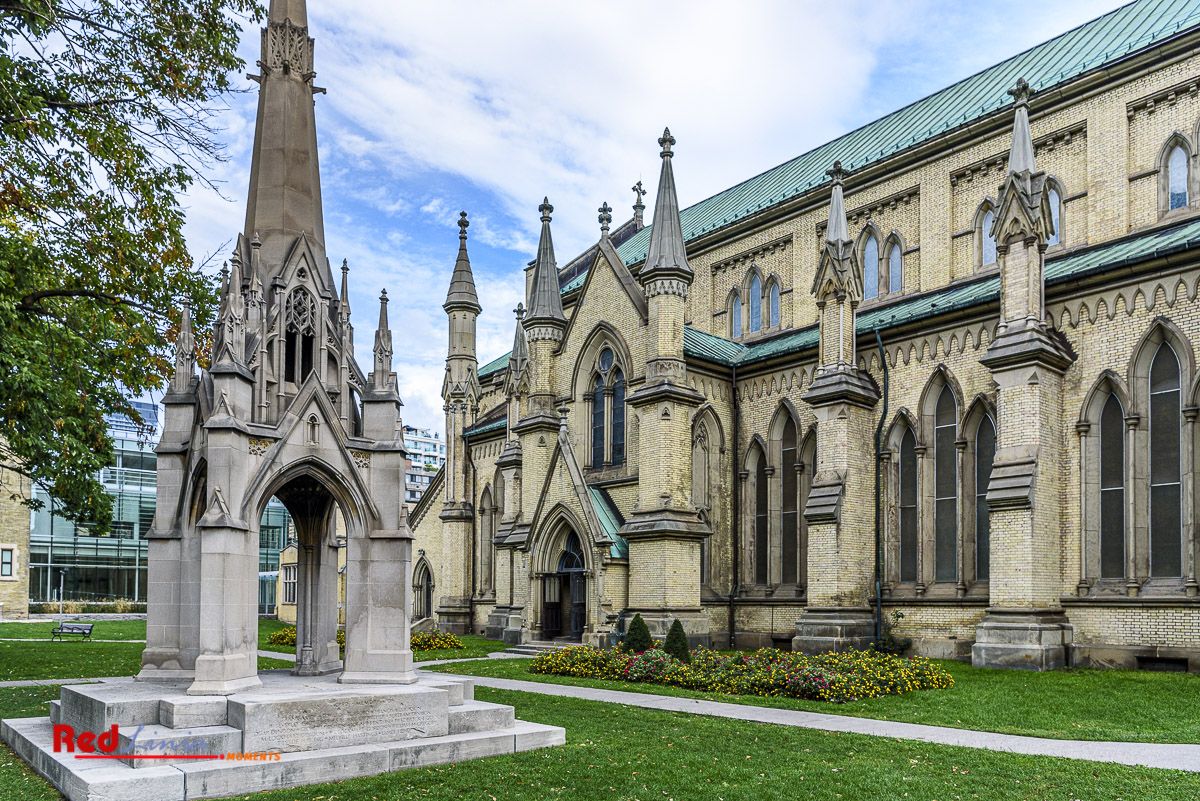 The Cathedral Church of St. James is an Anglican  Gothic Revival cathedral in Downtown Toronto, It was built in 1853 and considering one fo the oldest in a city. The cathedral's bell was used as a fire bell for the town.

At 92.9 metres (305 ft), the tower and spire have remained the tallest in Canada and the second tallest in North America after St. Patrick's Cathedral, New York—although the spire of St. James is still shorter than the dome of Saint Joseph's Oratory in Montreal, which is the tallest church in the Western Hemisphere. The tower has five bells that still ring through the city today, and the chiming clock is "one of the finest examples of a chiming public clock anywhere in the world." At the turn of the 20th century, St James' Cathedral was still the tallest building in Toronto, -Wikipedia

The fully professional 18-voice cathedral choir sings at the Eucharist (11:00 am) and Evensong (4:30 pm) each Sunday. The cathedral's pipe organ can be heard in recitals each Tuesday at 1:00 pm and Sunday at 4:00 pm throughout the year.

The church is mainly built with Georgetown rubble stone with facings of Ohio stone, with the occasional reddish brown freestone found in the neighborhood of Queenston Heights. The columns of finely polished red granite are from the Bay of Fundy coast.

Cathedral is excellent backdrop for photos and  great place to visit while you are in Toronto.

Located east of the Cathedral is St. James Park, an urban public park that is owned by both the church and the City of Toronto government.

Created in the early 20th century the park's Postmodern landscaping is Victorian-inspired, with formal gardens and a water fountain.

This is a popular location for wedding parties, but requres permit. 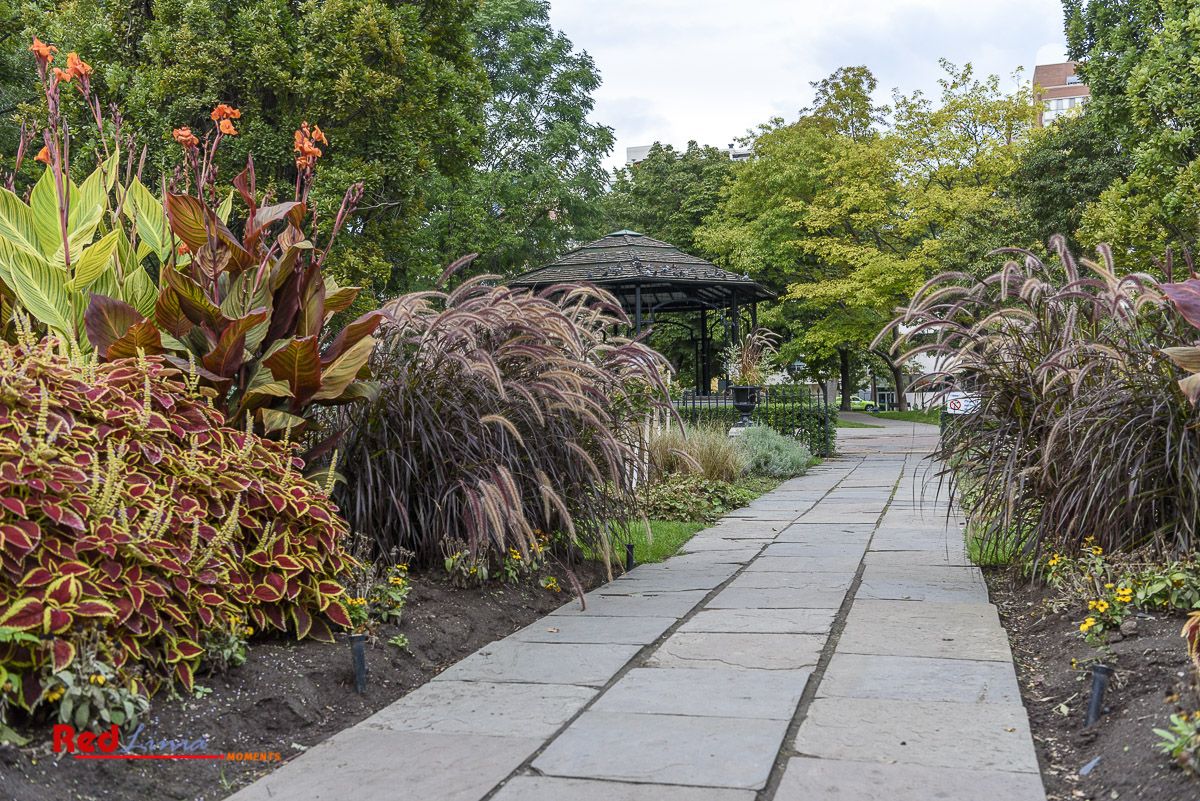 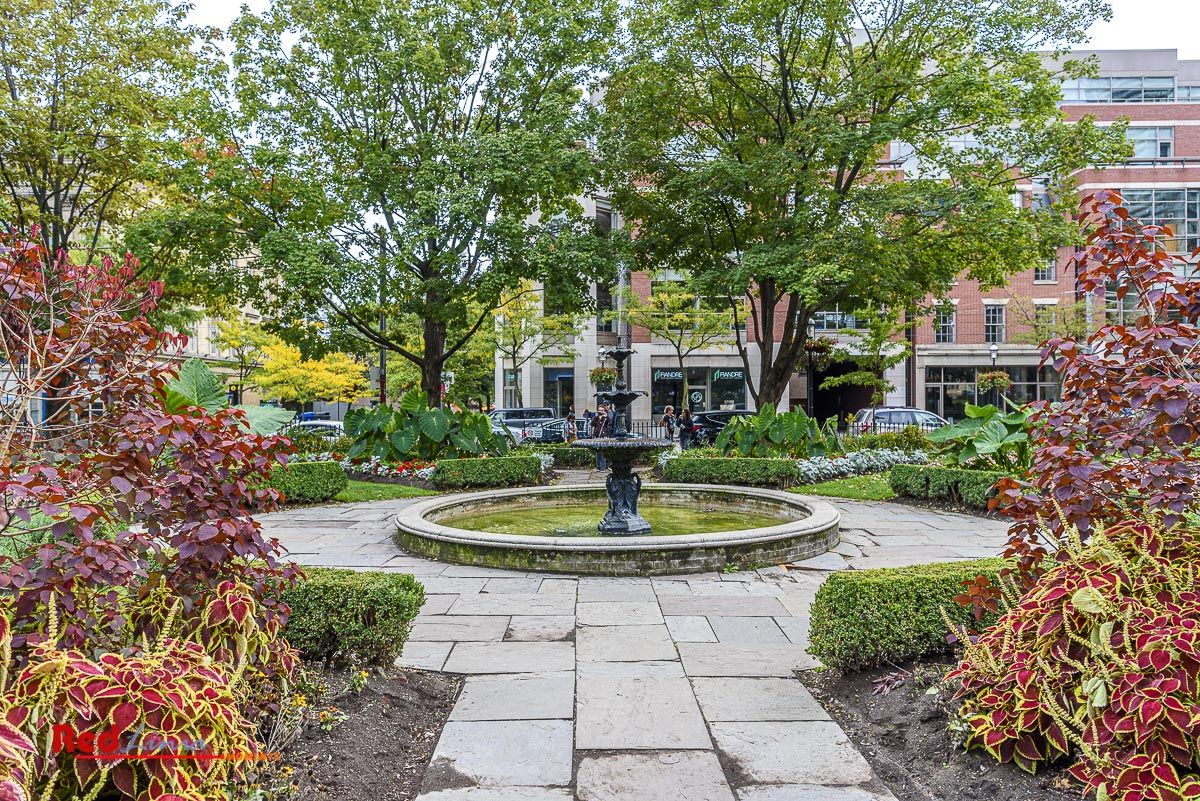 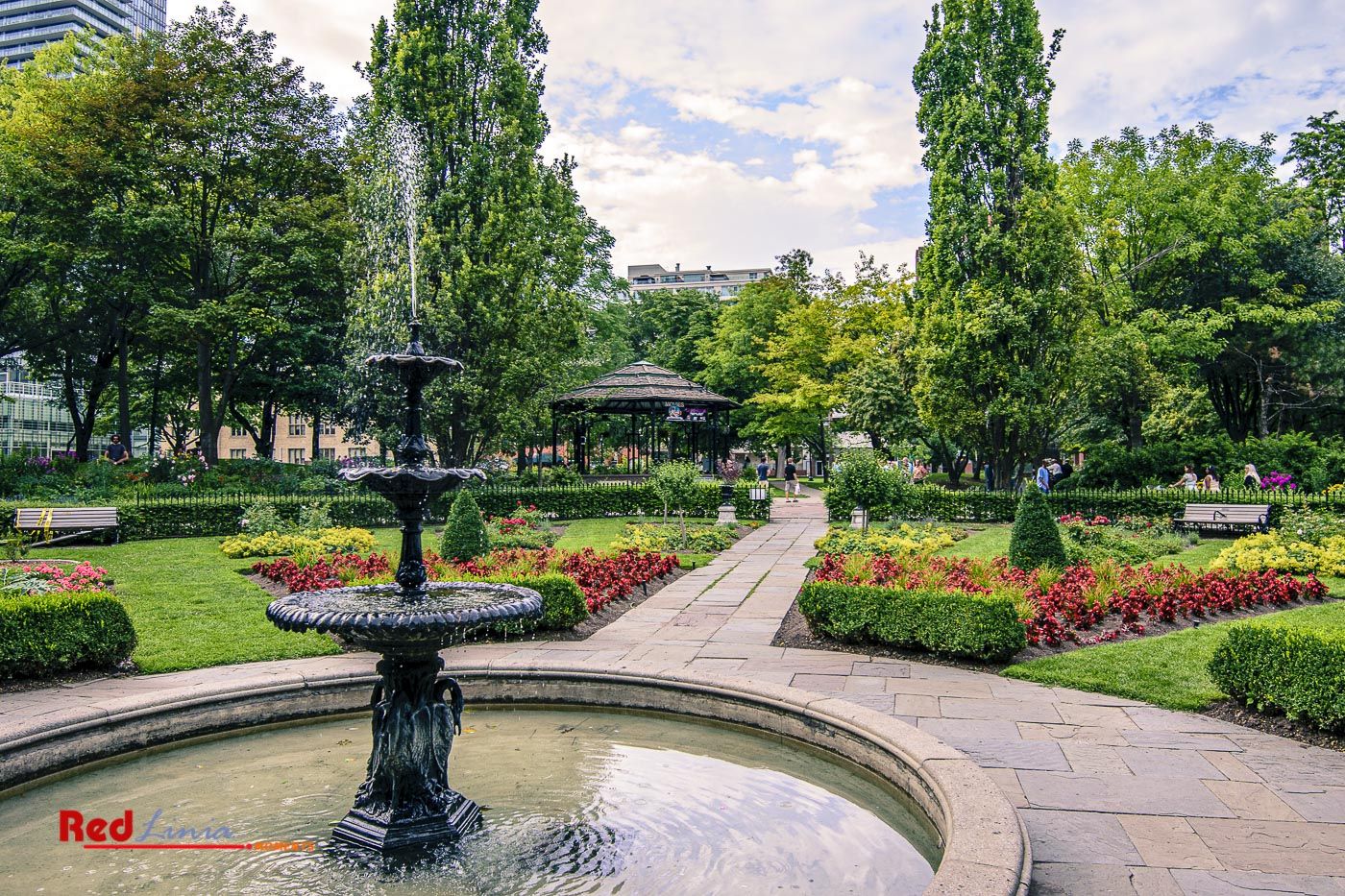 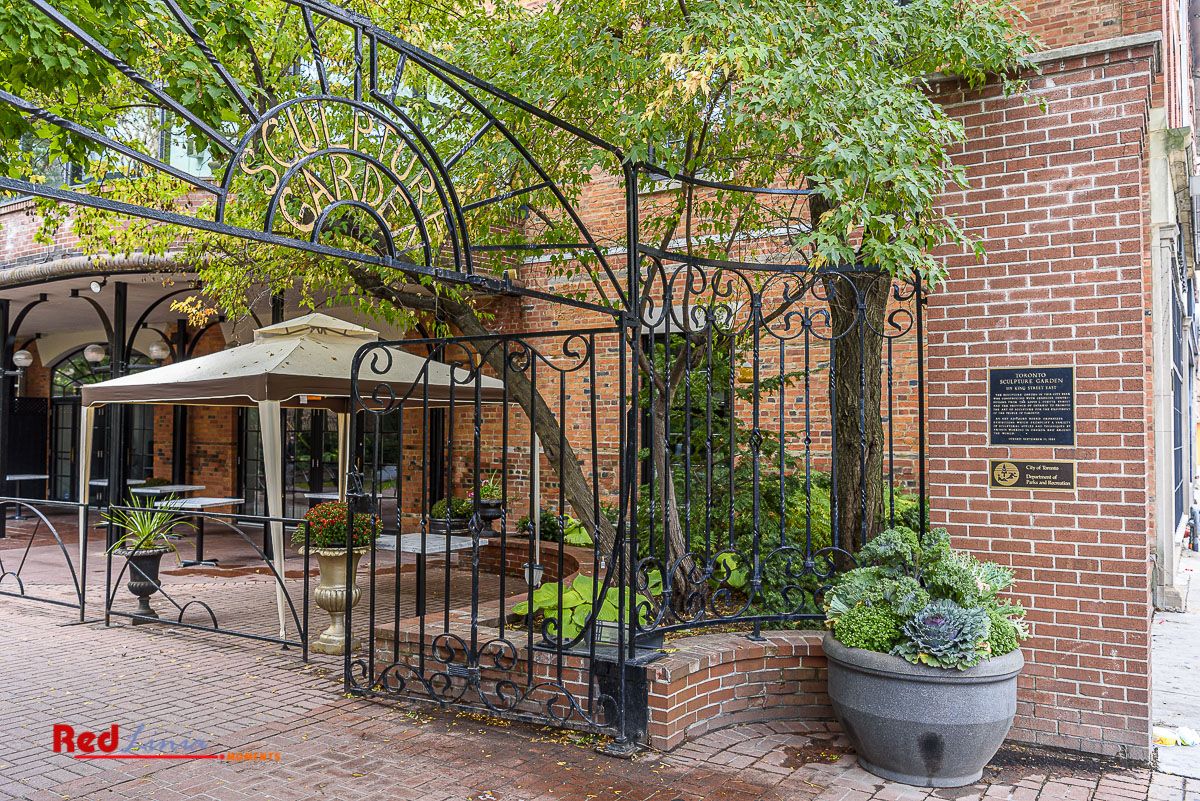 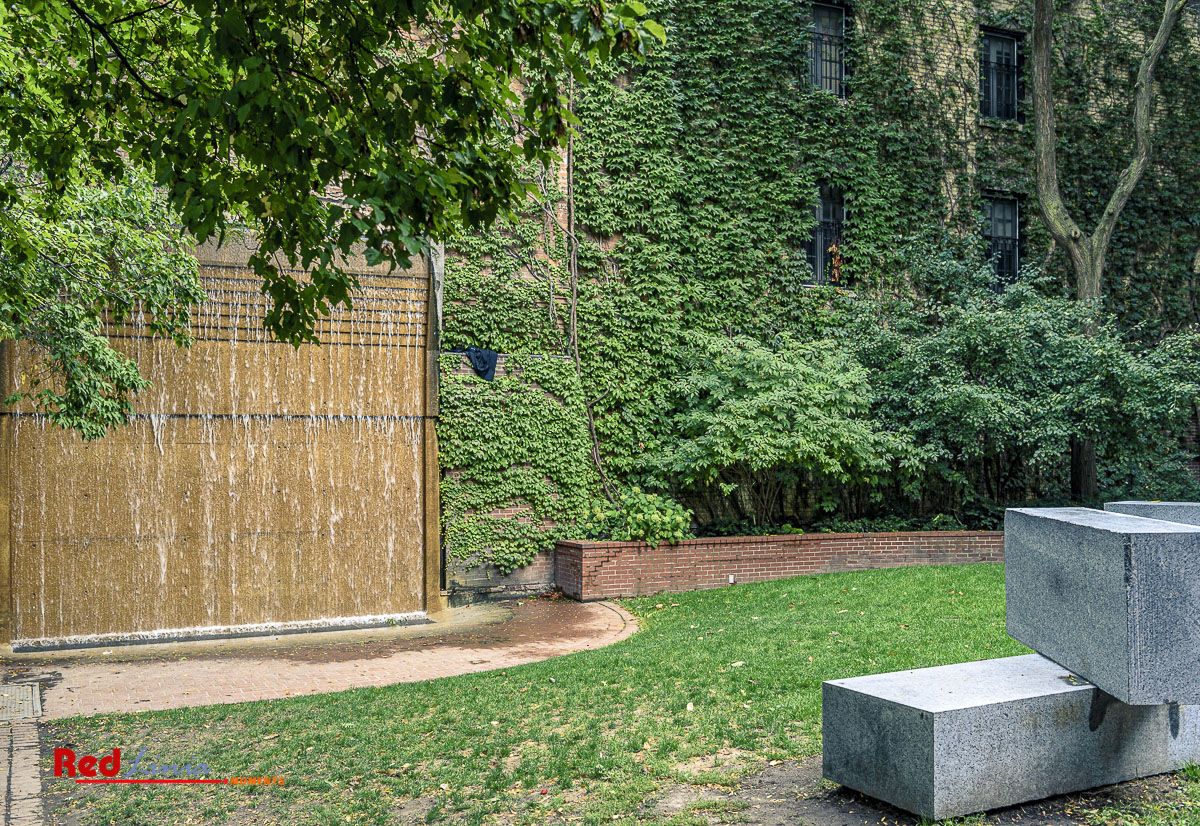 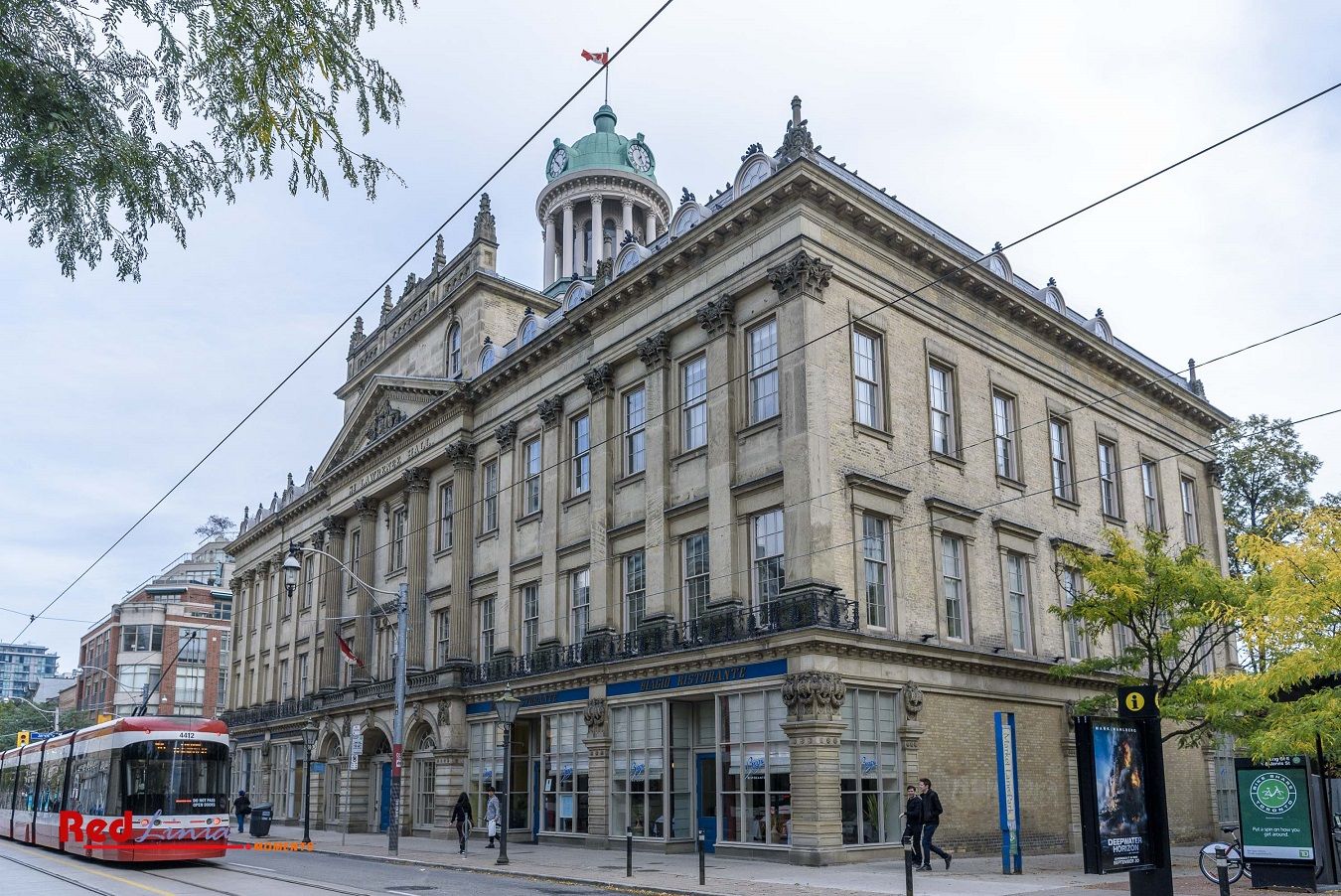 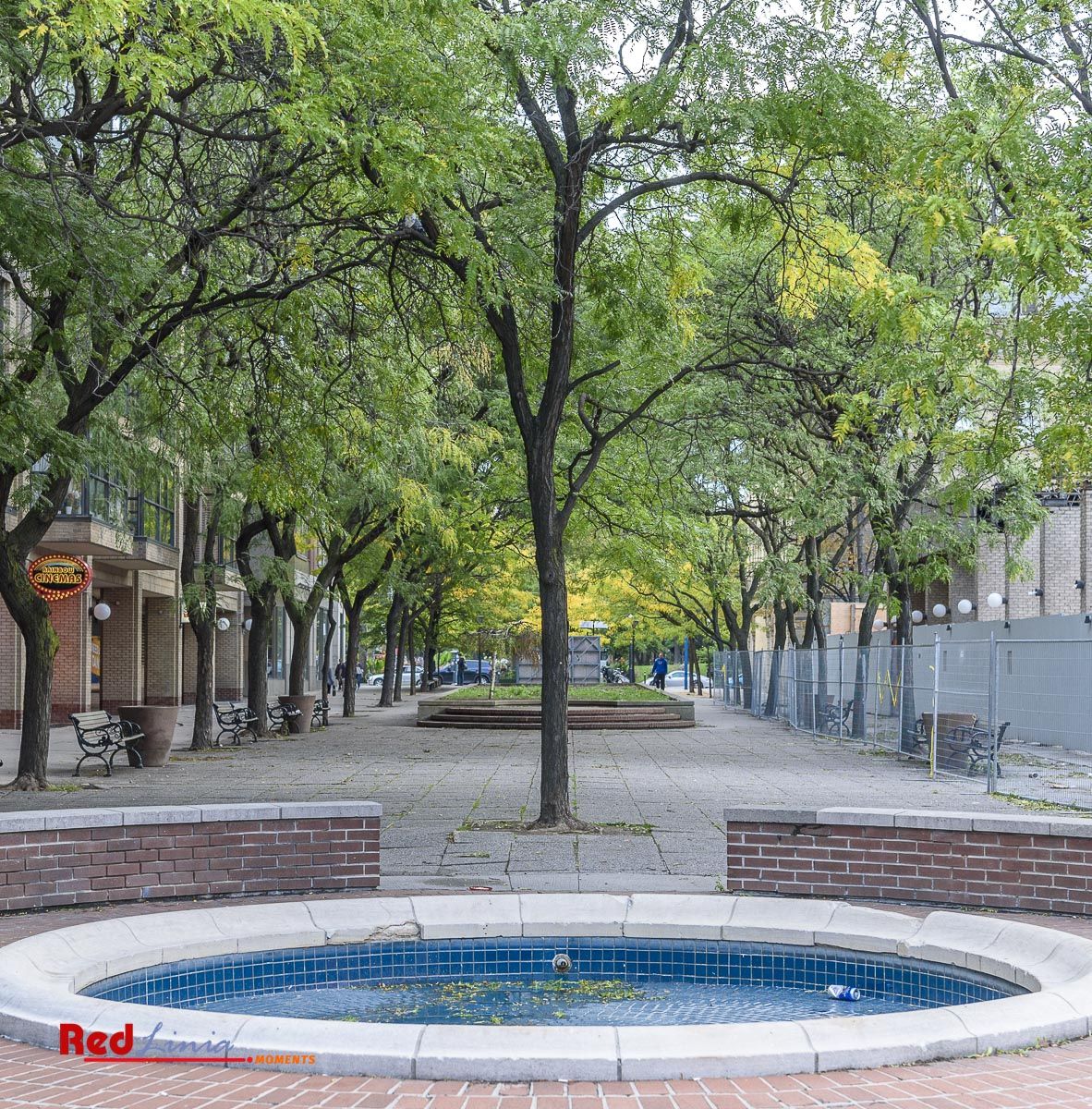 Opposite St Jame Park there is an small city park, interesting by showing work of various artists. Since it opening it held more than 45 exhibitions from more than 80 artists. Exhibitions change twice per year, typically in the spring and the fall

Information about current exhibitions can be found here.

Open daily from dawn to dusk. Admission is free.

Market Lane Park is located on the west side of the North Market Building and St. Lawrence Hall. Additional landscaping features like water fountain (south end at Front Street), rows of trees, flower beds and sculpture (at north end on King Street) have been added recently. There is large undergoing project .to replace North building with new site be fully operational slated for 2022. Proposed design is for a five-story building with a central atrium, connected to St. Lawrence Hall, office space and courts for market.

The St. Lawrence Market South was once home to Toronto's first permanent city hall and jailhouse from 1845 to 1899

Today houses a farmers' market each Saturday featuring 43 vendors inside the building and numerous cart vendors outside of the building, and an antiques market on Sundays.

ARea has own charm, so take your time and stop for cofee in one of the cafe and enjoy a moments.

Commonly referred to as 'Toronto's Flat Iron', the Gooderham Building is another iconic and historic structure situated at the intersection of Wellington and Front Streets. It is a spot for many instagram photos and probably the .most photographed historic buildings.

The Gooderham Building is well-known both for its narrow wedge shape and for the mural on its back wall. The Flatiron Mural by renowned Canadian artist Derek Michael Besant uses a trompe l'oeil effect to make the wall appear to have more windows than it does. Itslef, building features many interesting design elements and art.  Prominent rounded corner, Romanesque cornice and frieze above the arched windows, French Gothic archway. and many other deatils. 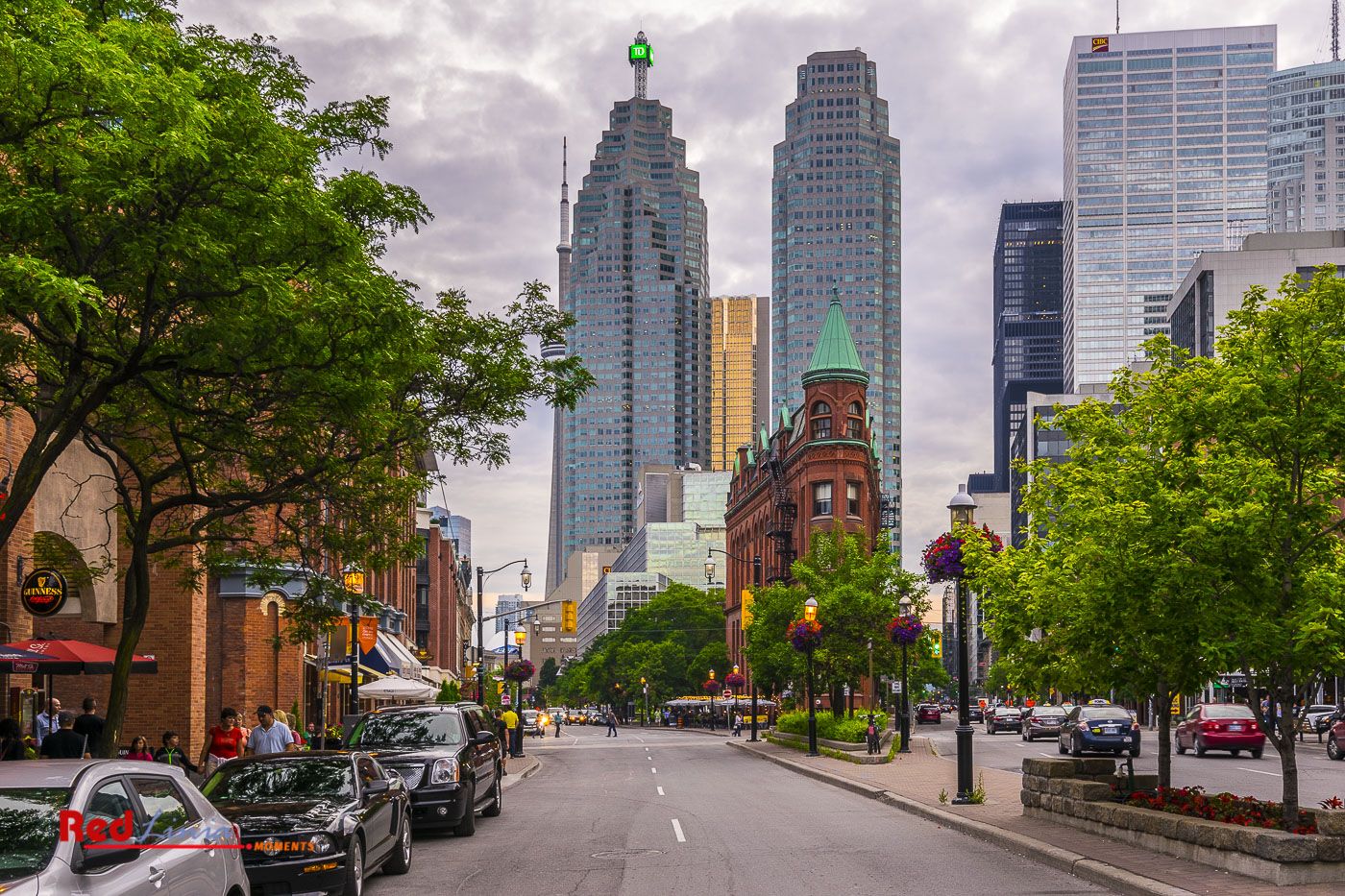 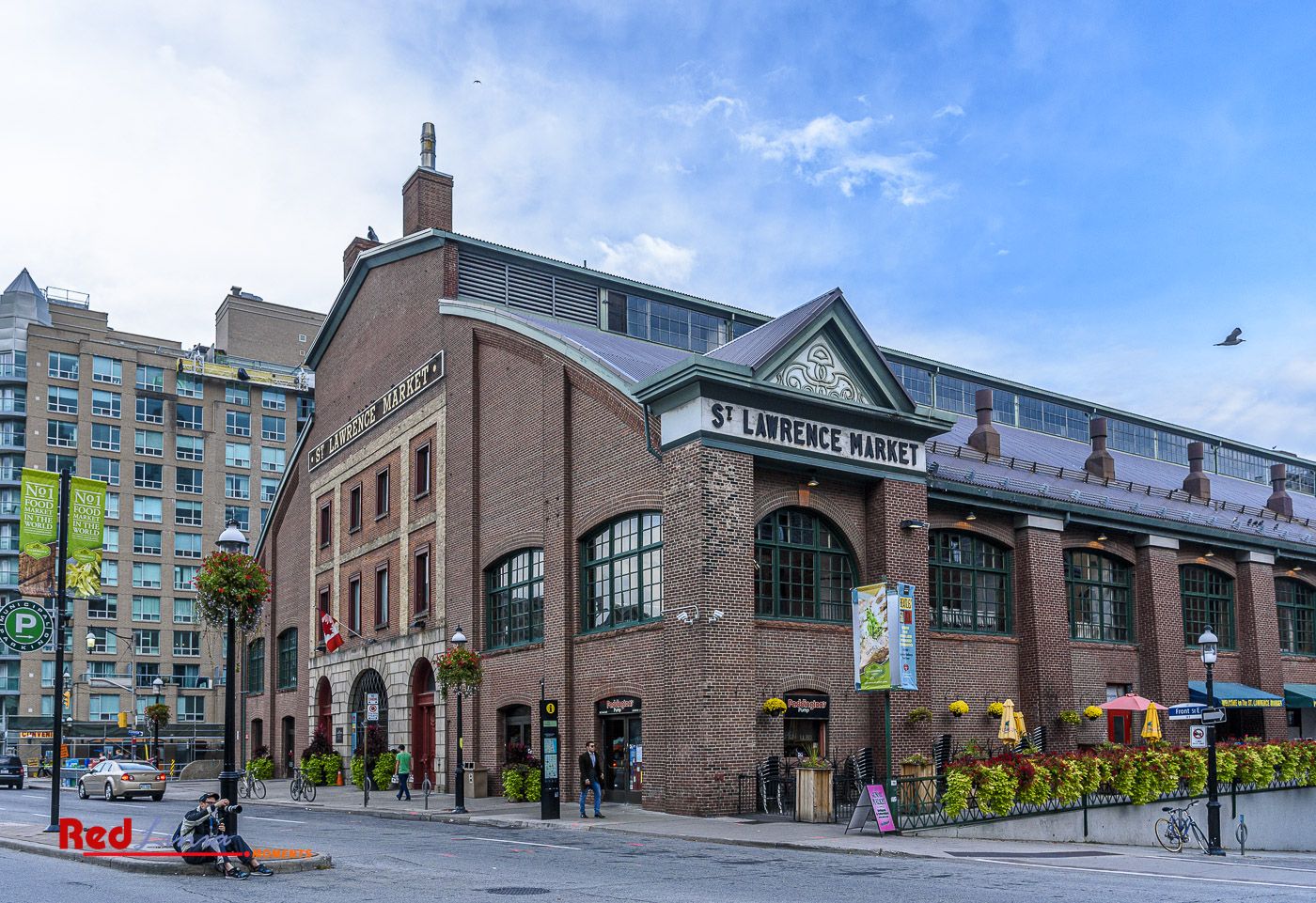 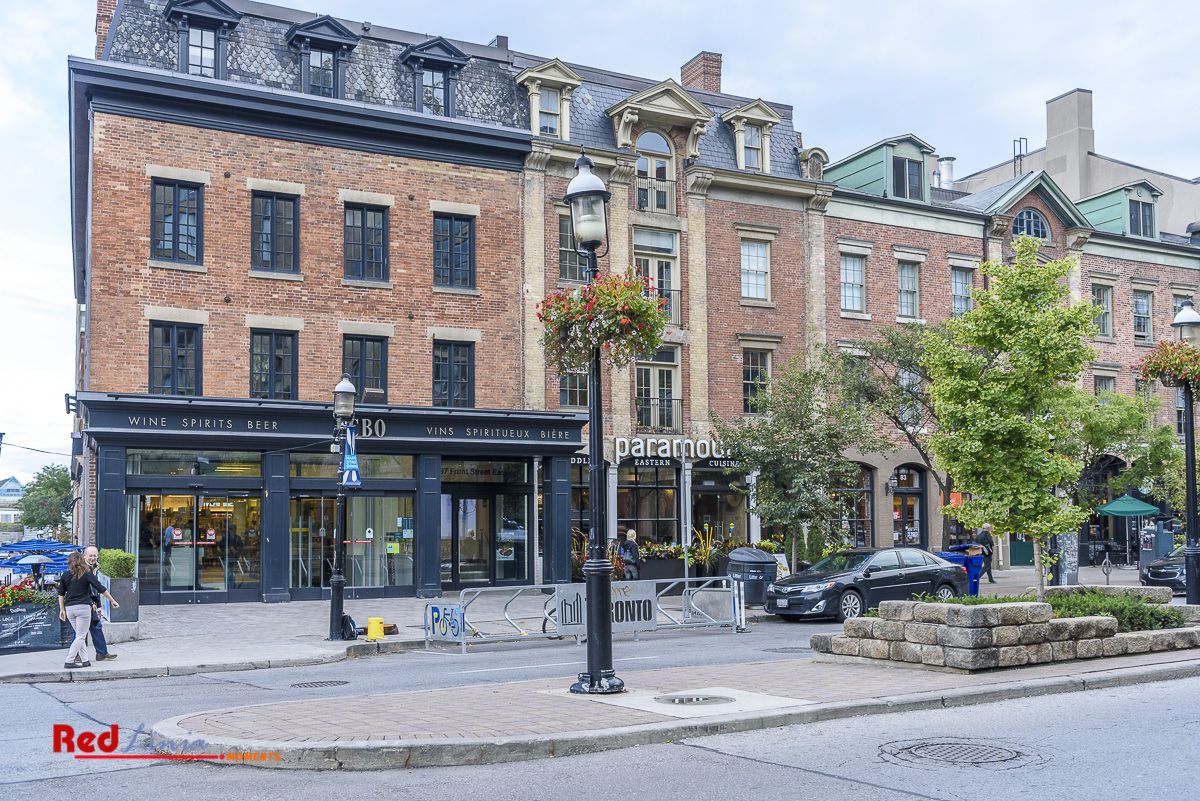 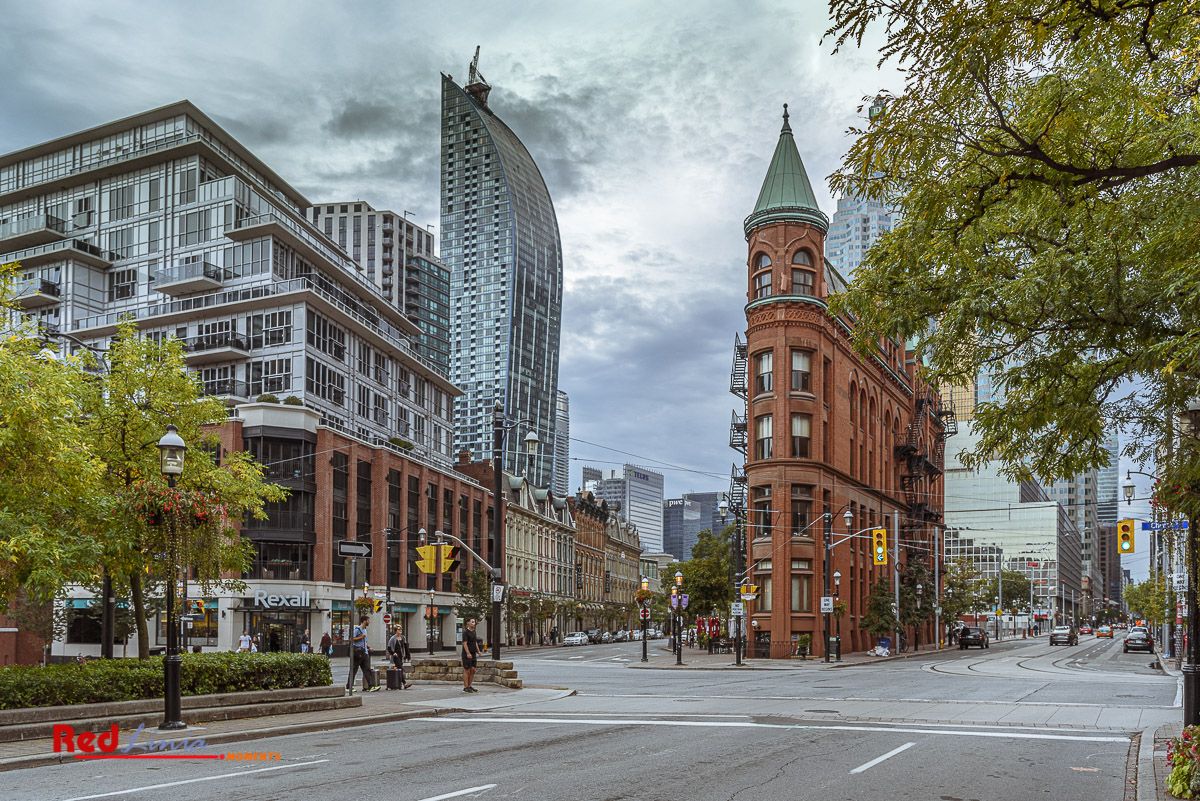 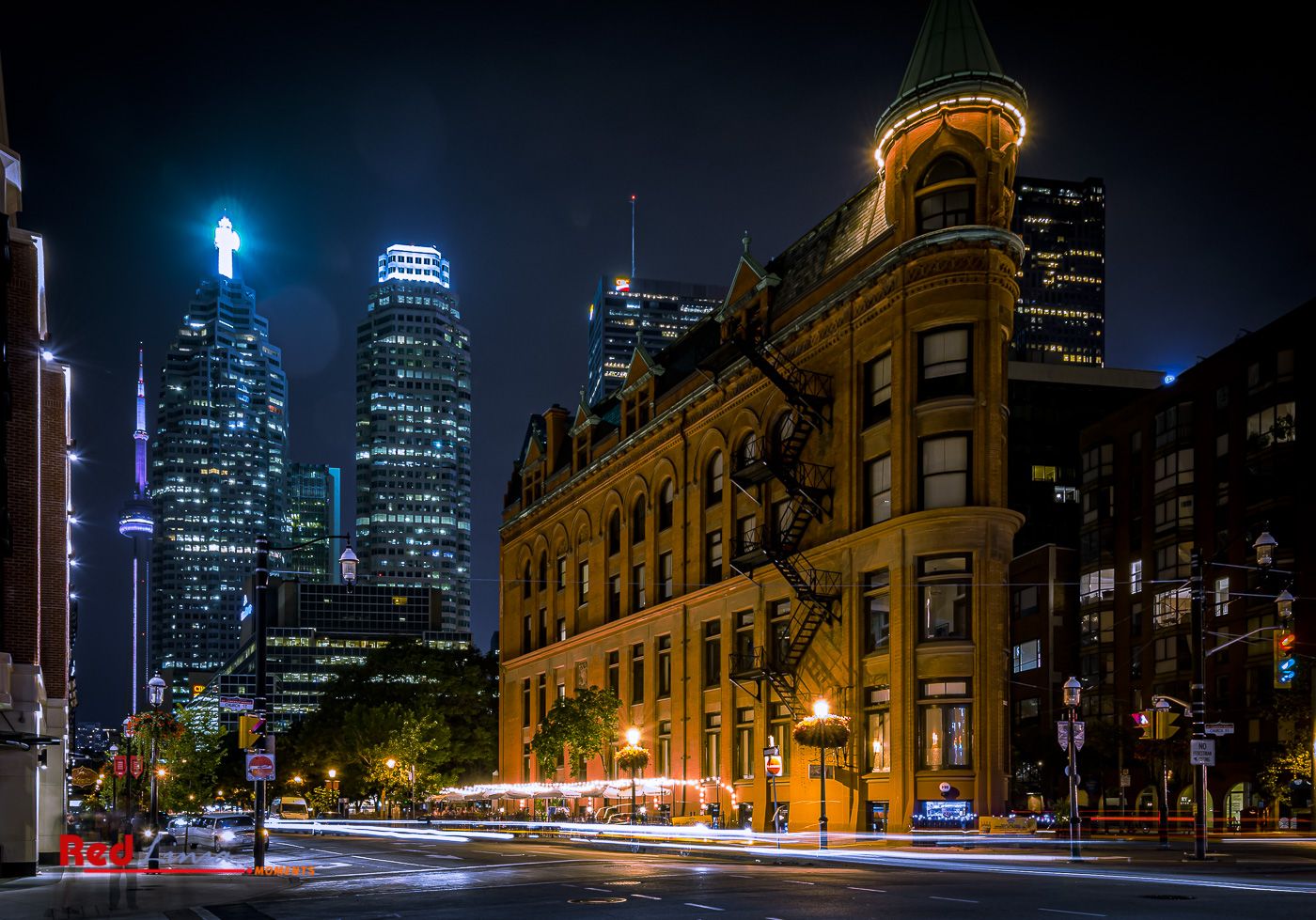 A classic steak hous in Downtown Toronto with New York Style Piano Bar on 2nd floor, One of the interesting features worth to stop by is vintage style exterior patio setup. 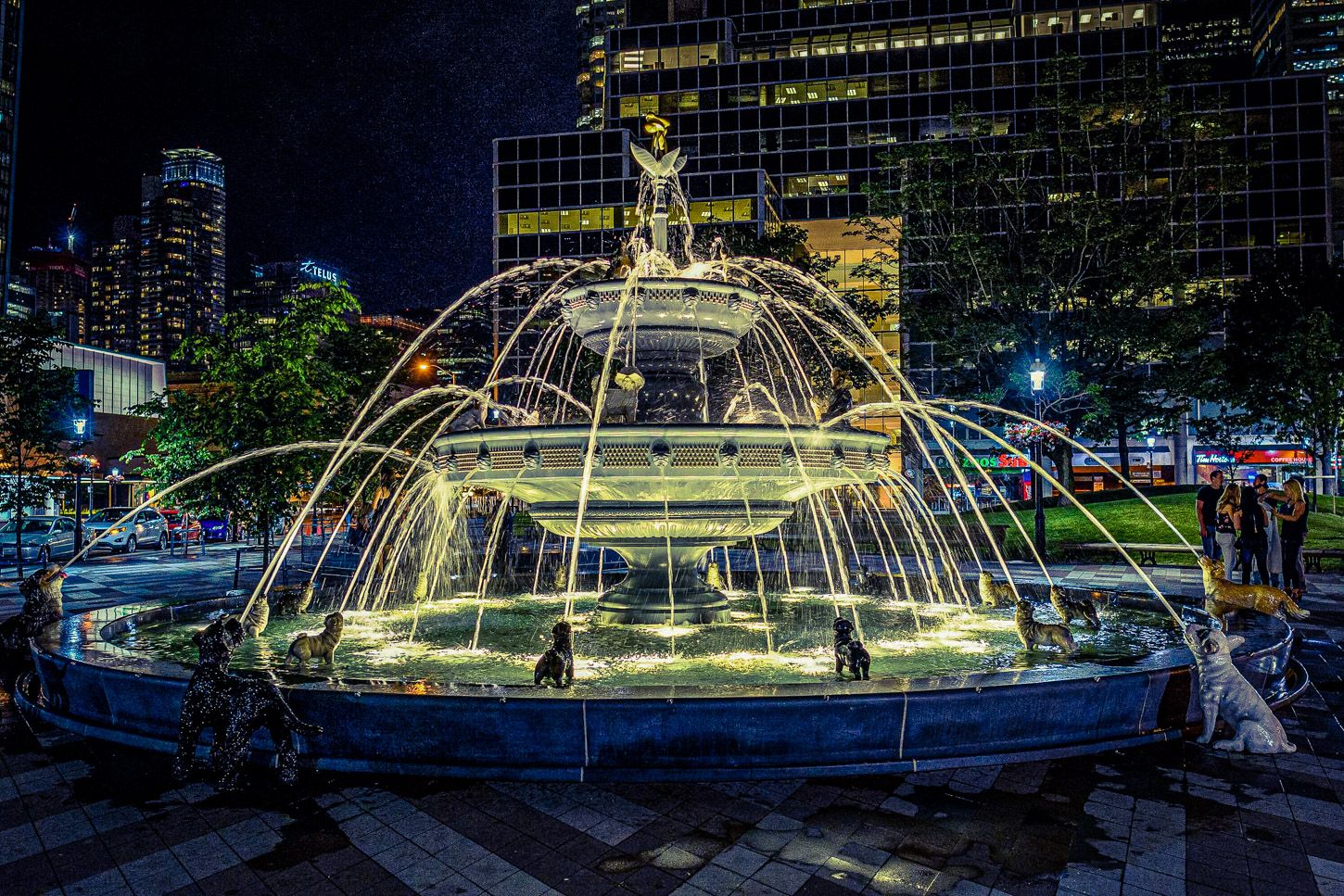 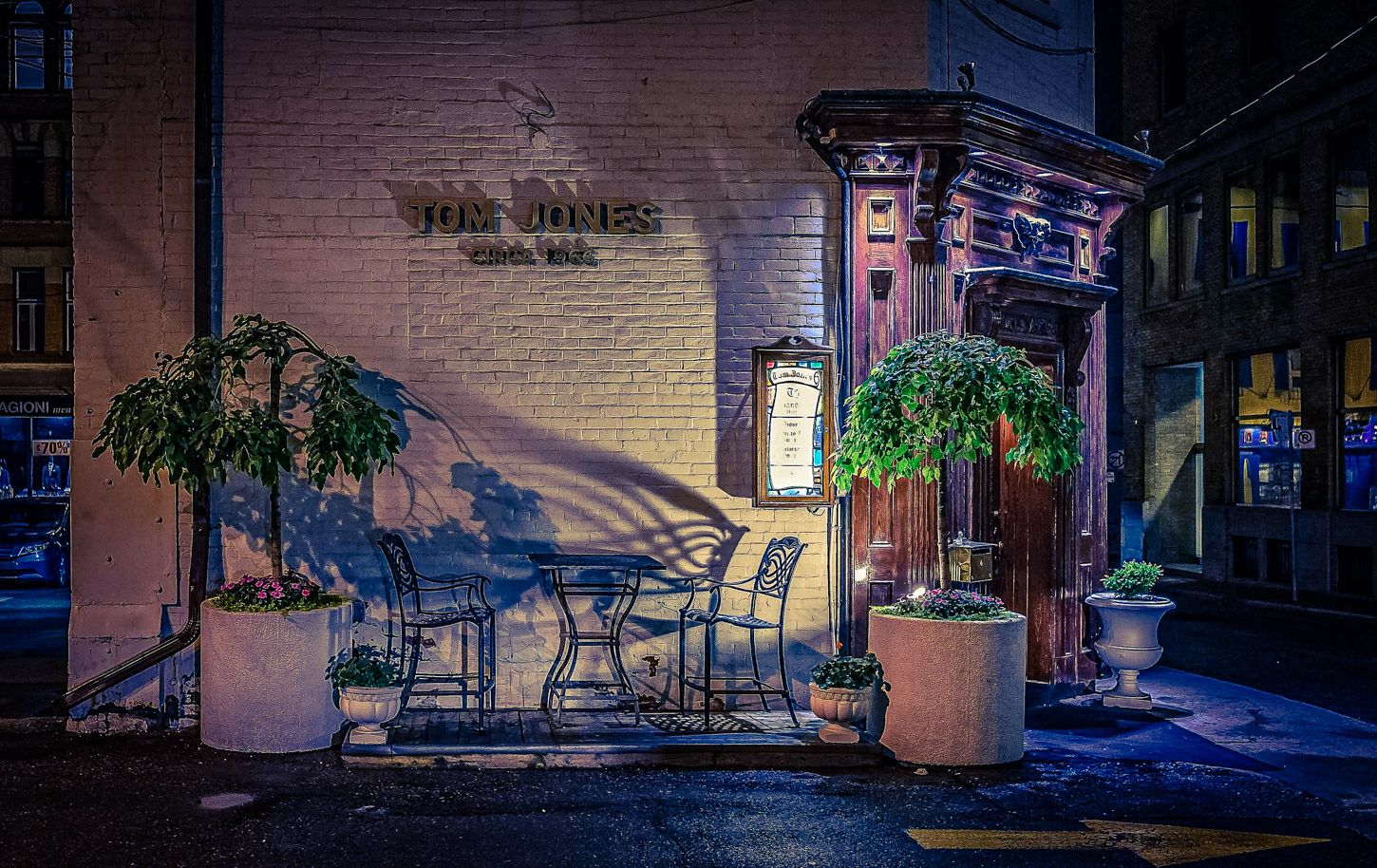 "Adam made from steel mesh lies staring at the sky with water flowing from his mouth, suggesting oneness with his environment. The bronze tree shoots water into the air which falls back down as raindrops while the stainless steel bubbling flower suggests another of nature’s cycles. The paving stones are also patterned in concentric circles of waves connecting the garden together.  The mural above has the ever present snake threatening to destroy the garden."

Living in Toronto and being in Downtown Toronto so many time I never saw it until I walked discovery path. 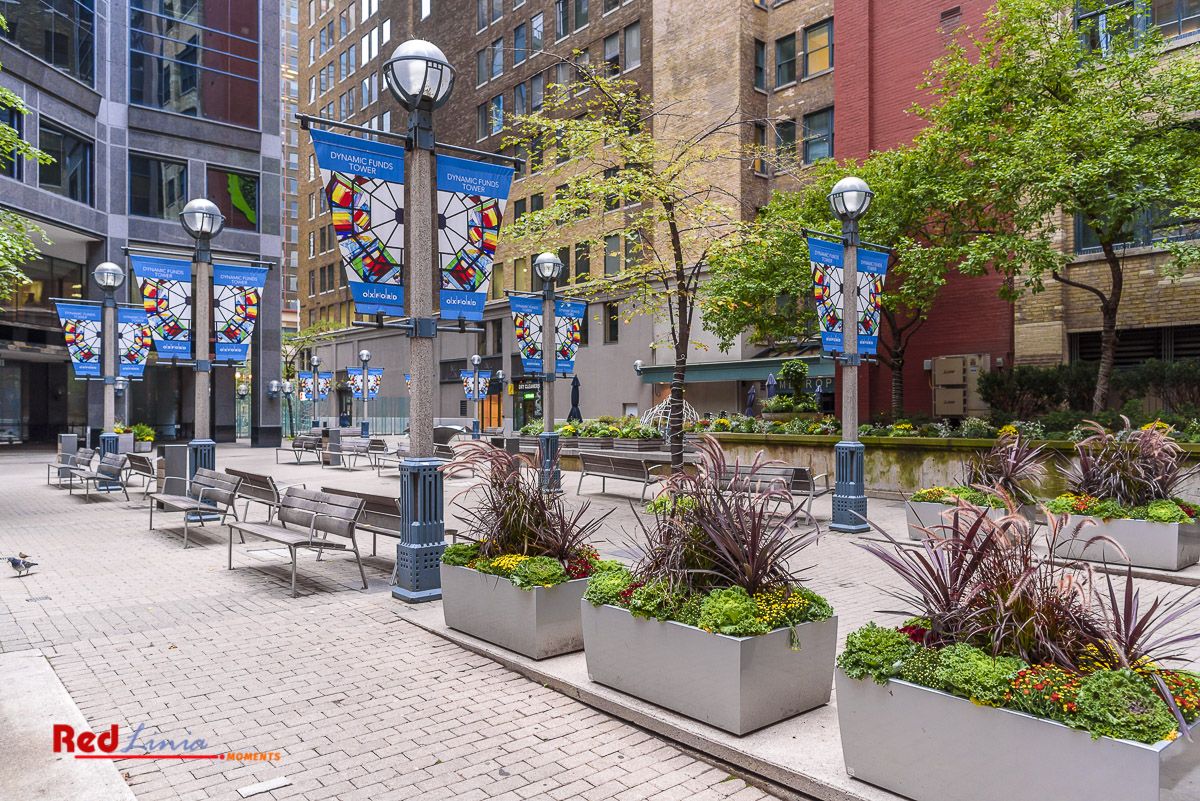 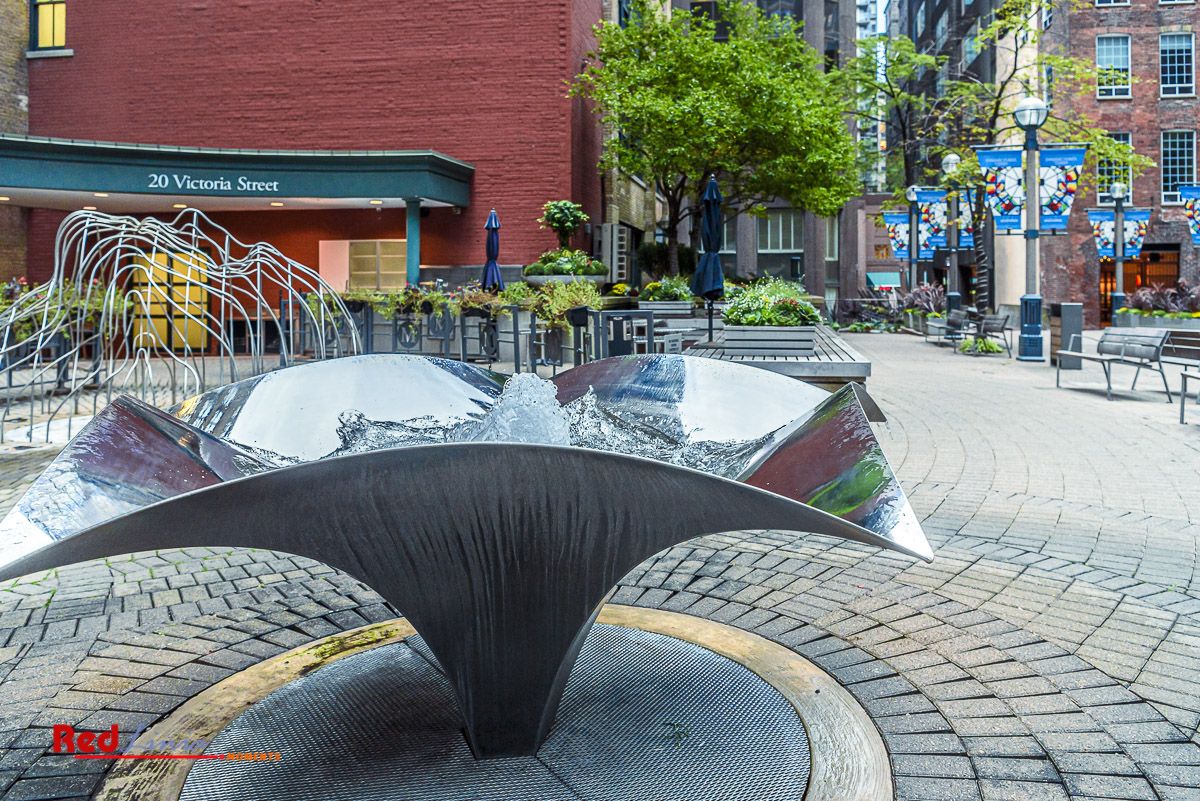 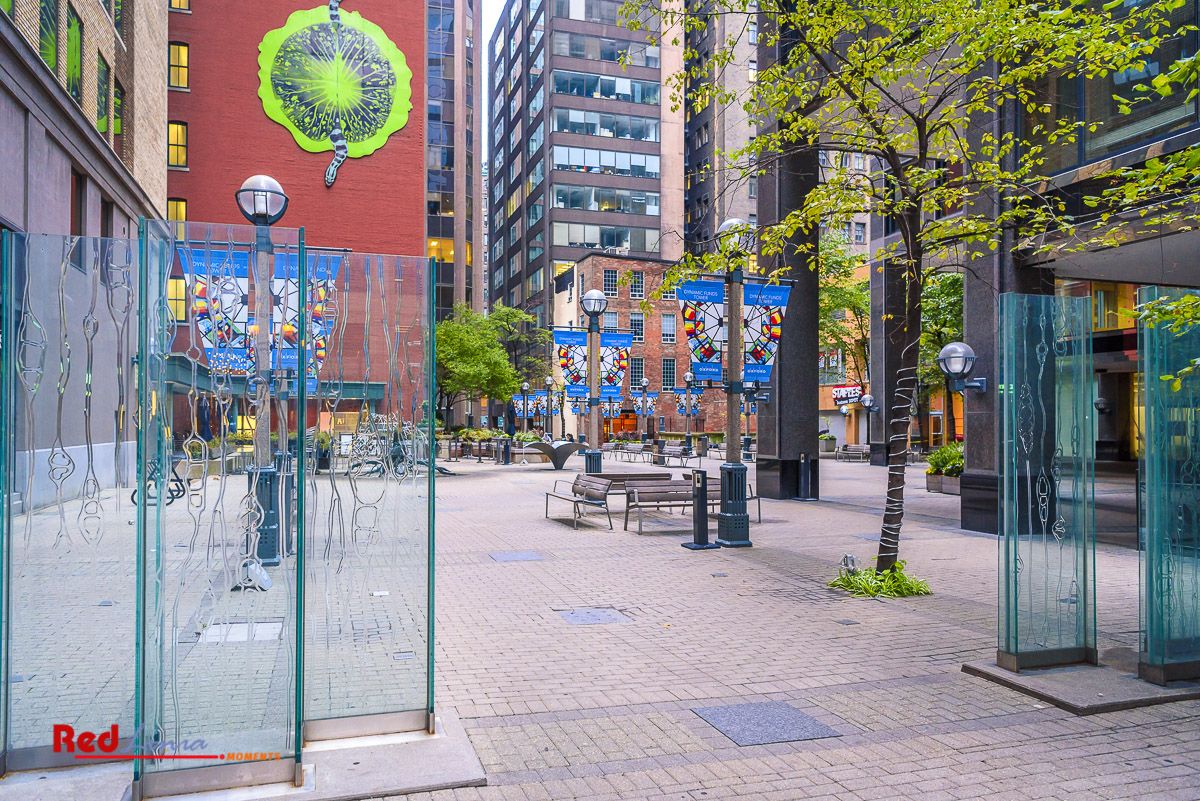 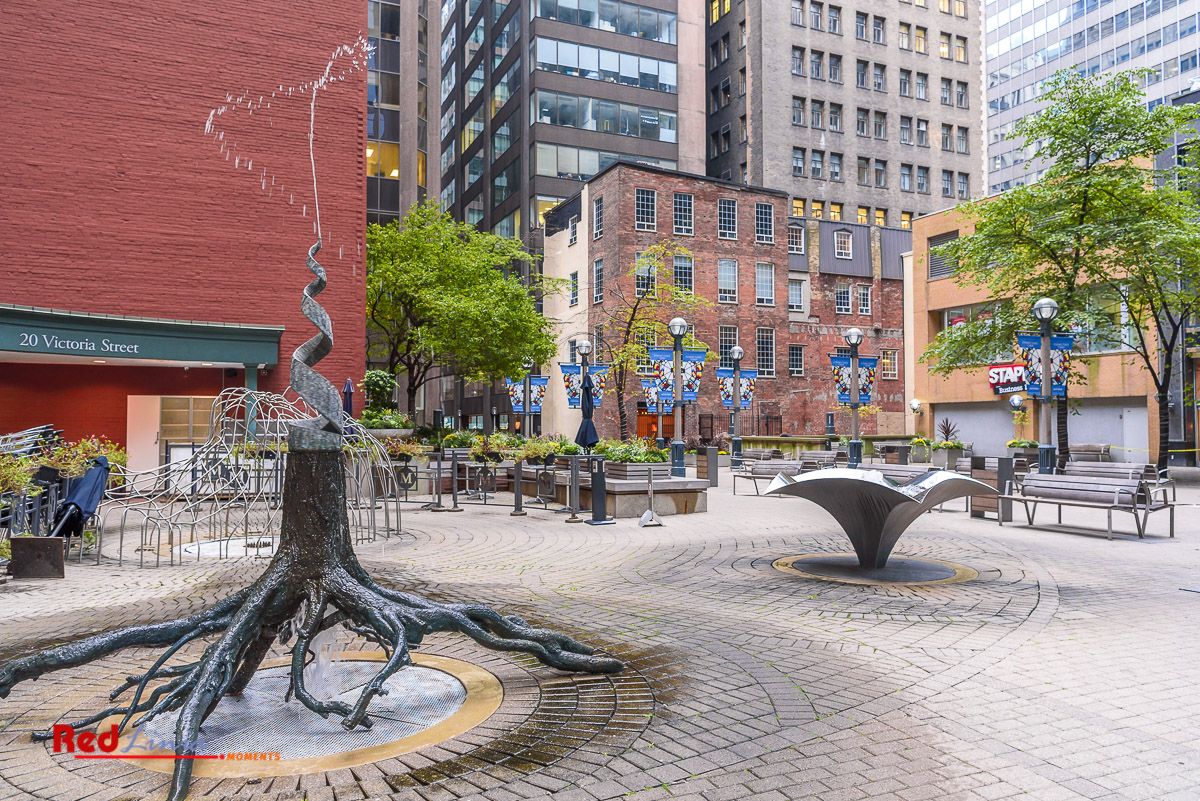 Continue walking a path between towers in Financial district and don't miss Cloud Gardens or "Bay Adelaide Park", a small park in downtown features own waterfall and unique greenhouse. Another park feature is The Monument to Construction Workers, a giant wall built from colorful one-metre square panels panels made of 25 different materials like concrete, stainless steel, and zinc, set in a red oxide steel grid.

Update July 2020. Unfortunately this unique garden currently is closed for construction and repair with plan to reopen in fall of 2022.

Another space of Public Art located  in the courtyard of Commerce Court, a sculpture of mother Elephant leading the babies to fountain and pool in a middle of courtyard.

Tembo was completed in 2002 by Derrick Stephan Hudson, and is currently on loan from the L. L. Odette Foundation of Windsor, Ontario.

P.S. It is said, that Financial District in Toronto has a highest concemtraion of Public Art ion Canada 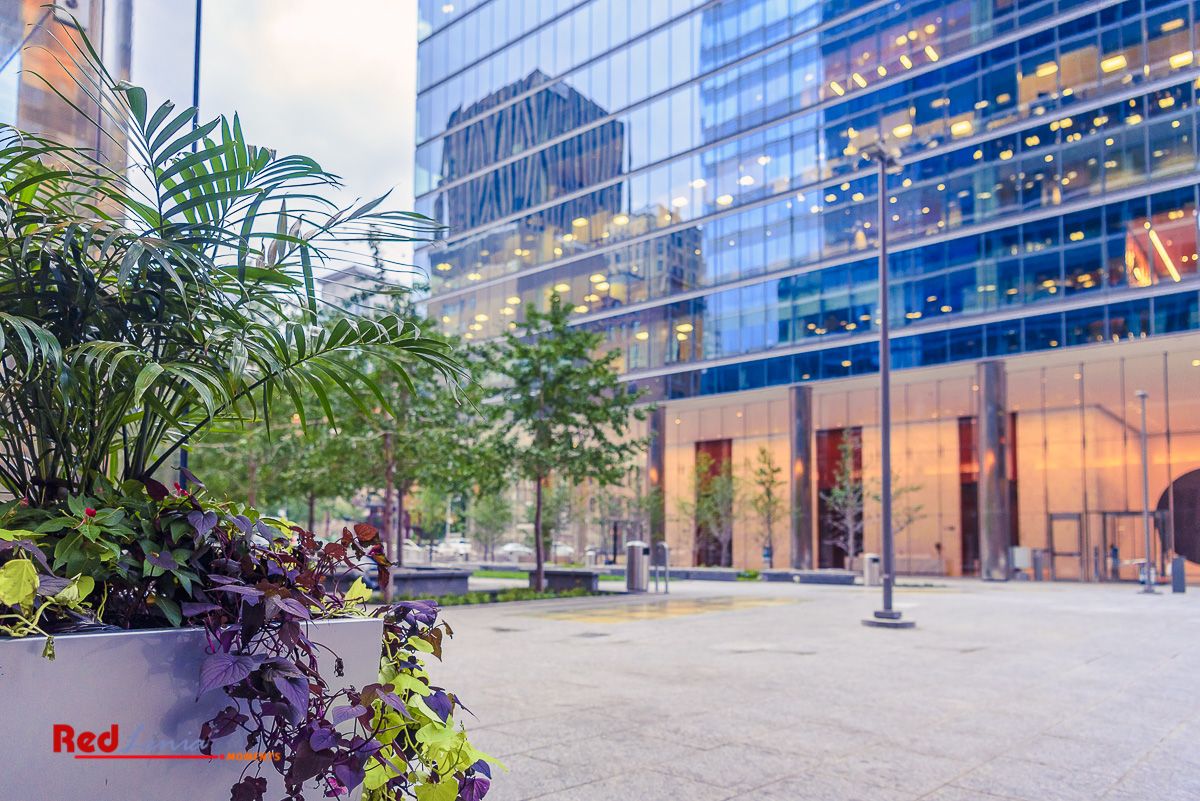 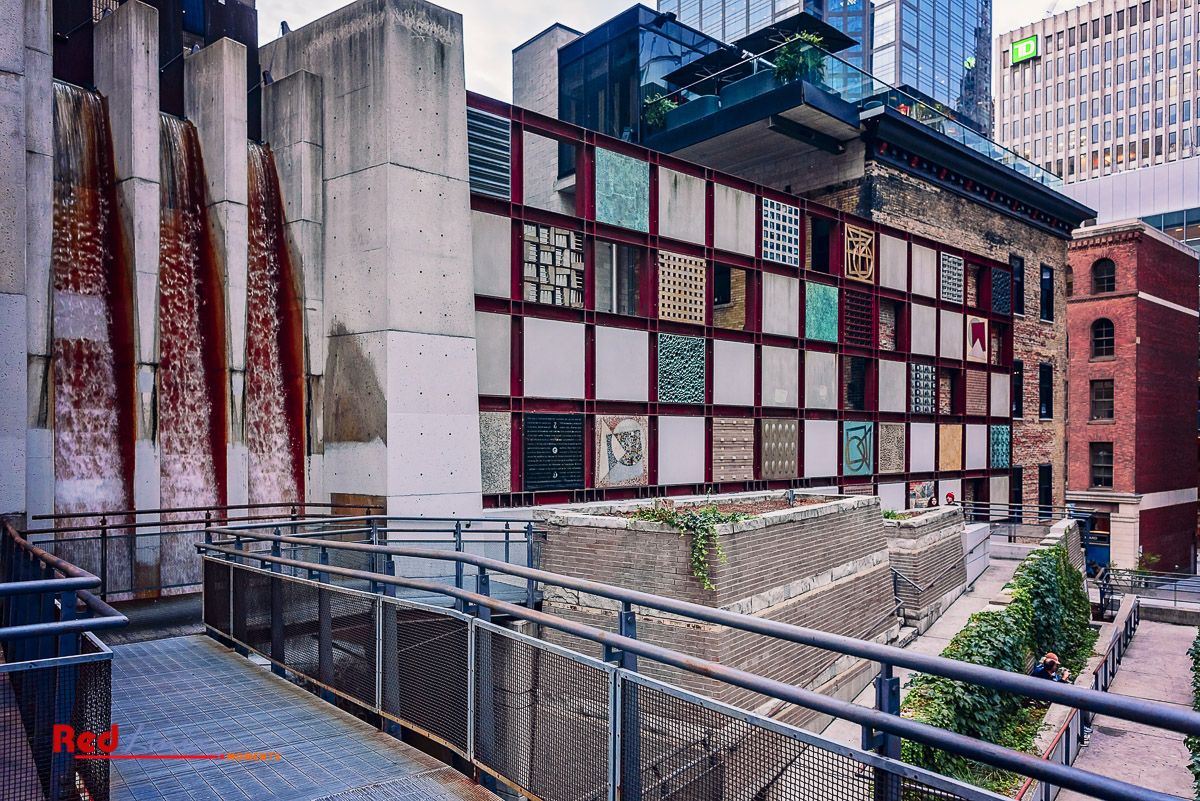 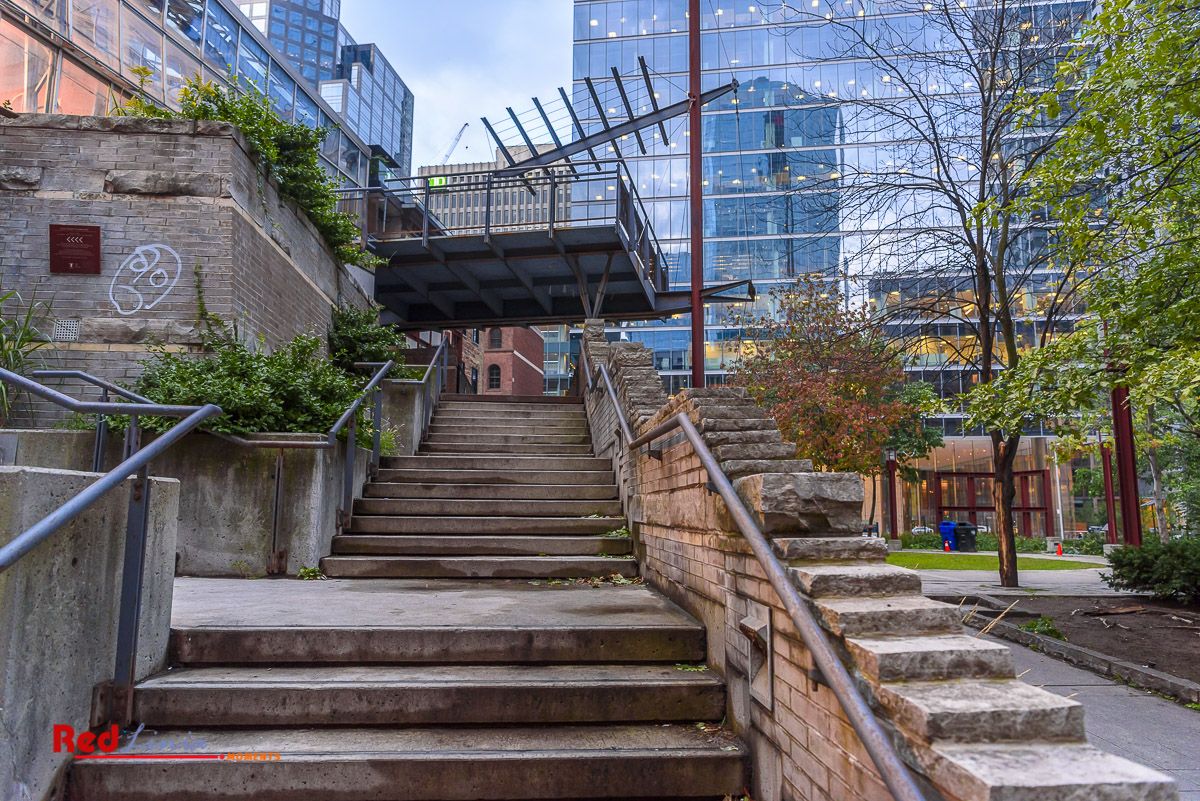 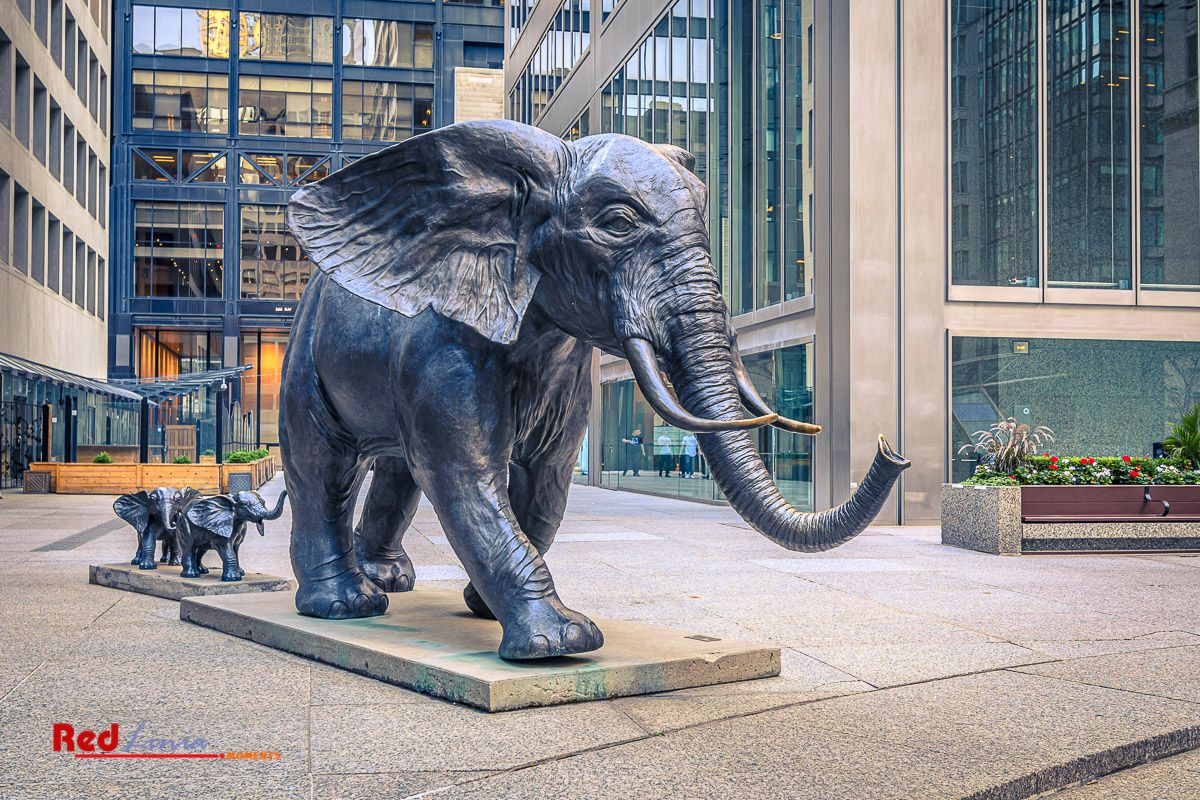 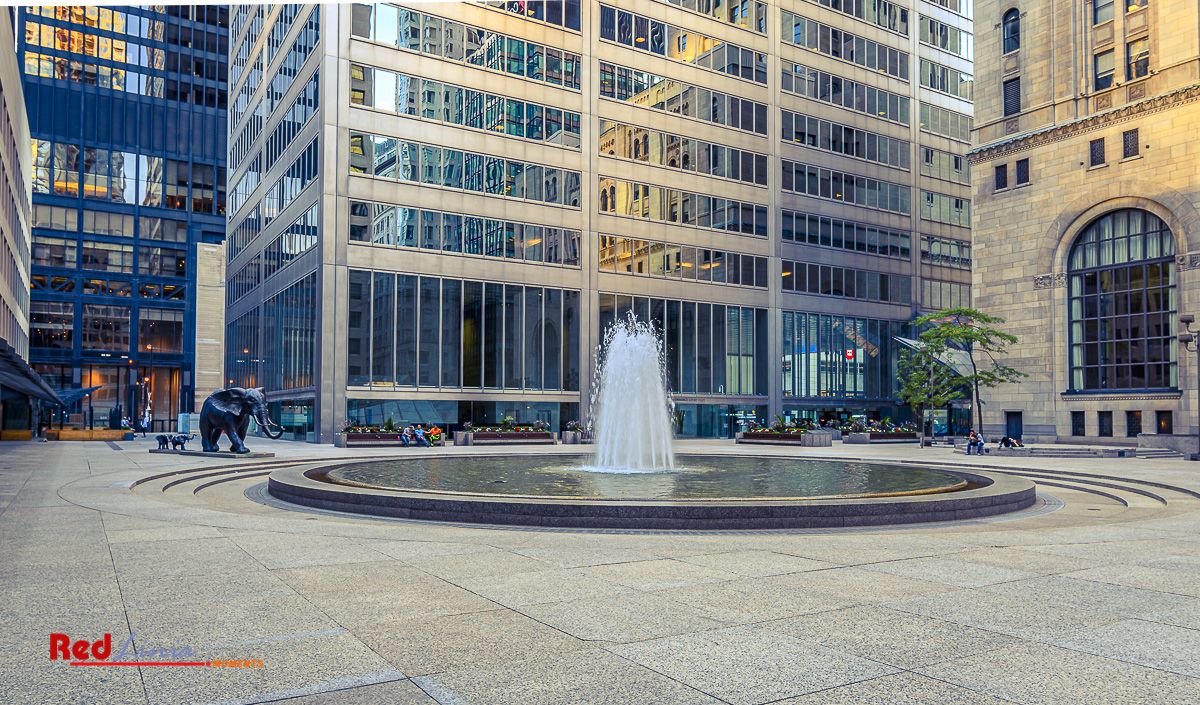